The client was tired of their boring backyard that had a steep slope which made entertaining difficult. In their minds, the area was ugly and simply not usable. The client had also just completed an add-on to their house, which included a basement entrance that wasn’t even being used due to the large drop from the door. In need of some help, they called Ecoscapes to find a solution. Below is what the area initially looked like:

The client’s backyard in Swannanoa, NC was a blank canvas and the client allowed us to do what we thought was best, which made the design a little easier for Ecoscapes. The first necessary item was obvious – their backyard needed some grading. The sloping backyard didn’t allow for any kind of space to entertain. The second necessary build was a raised deck out the back door of the basement that would have enough space for a hot tub. The hot tub deck initially wasn’t part of our plans but was added in halfway through the project. From the back deck, there would be steps down to a gorgeous flagstone patio with built-in firepit. From the fence at the side of the house, there would be a sloping walkway with stone steps down to the patio. Lastly, the finishing touch was placing shrubs and greenery around the area!

Below you will see the full process of our landscape installation with pictures of the backyard in  Swannanoa, NC. We hope you enjoy.

Before any other parts of the project could start we needed to grade the backyard. First, we notched out where the patio area would be so it would flow well from both the house, top deck, and bottom deck. Then we used an excavator and laser transit to get the exact grade we needed. The end result was the perfect amount of usable space.

The client initially wanted pavers in this area to match the patio but that would have called for a significantly larger amount of stone as well as a retaining wall to create the area they wanted. The desire did not outweigh the costs so we decided on a raised deck to match the top deck. We did a split-level deck to accommodate a hot tub and a walkway to the stairs. The end result was a wonderful space to relax in the hot tub and transition down into the yard.

The client definitely wanted a fire pit and enough space to entertain 6-8 people. So we decided on flagstone patio, boulder wall, and a firepit with a drain. First, we acquired boulders from Virginia and built the boulder wall to retain the soil on the slope above the patio. We integrated the boulders into the steps as well to transition the walkway and patio.

The patio was created next by compacting the ground and then placing a layer of gravel and granite dust down. This mixture is called roadbond and compacts into a solid surface similar to concrete. To do this, we use a Plate Compactor and go back over the roadbond after it’s laid down.

Next, we laid out the patio design and put aluminum paver edging up to ensure the flagstone would stay in place for years. We then placed a ⅝ inch layer of granite screenings down to level the patio area and ensure the flagstone would be smooth. Next up was the firepit. Before we set that patio we actually installed a drain so as to avoid the mud pit you get after a big rain storm. The drain was stealthily designed to drop off the lower side of the patio so as to conceal it. Once the patio was laid and set, we started to build the fire pit up over the installed drain. Once this is ready, we lay out each piece of flagstone around the firepit and ensure that it flows into the next piece. We tap each one with a rubber mallet to compact the granite screenings and make sure it’s solid.

Lastly, we needed to essentially “grout” the patio. We broom in Polymeric Sand into the joints and activate it by misting down the patio. This turns it solid and creates a complete patio surface.

The walkway actually extended all the way to the front yard so guests could easily access the backyard. We excavated the pathway down to a solid surface and made sure the path meandered through the yard in a nice, natural flow. We used Tennessee Field Stone Rock Edging to line the walkway and installed a few more boulder steps to compensate for the grade. Lastly, we placed brown pea gravel throughout the walkway to bring it all together.

We planted shrubs and mulched along the walkway, the outside of the patio and around the bottom deck. We also tore out all the old grass and reseeded the whole lawn to give it a complete look, placing straw over the area to help germination. 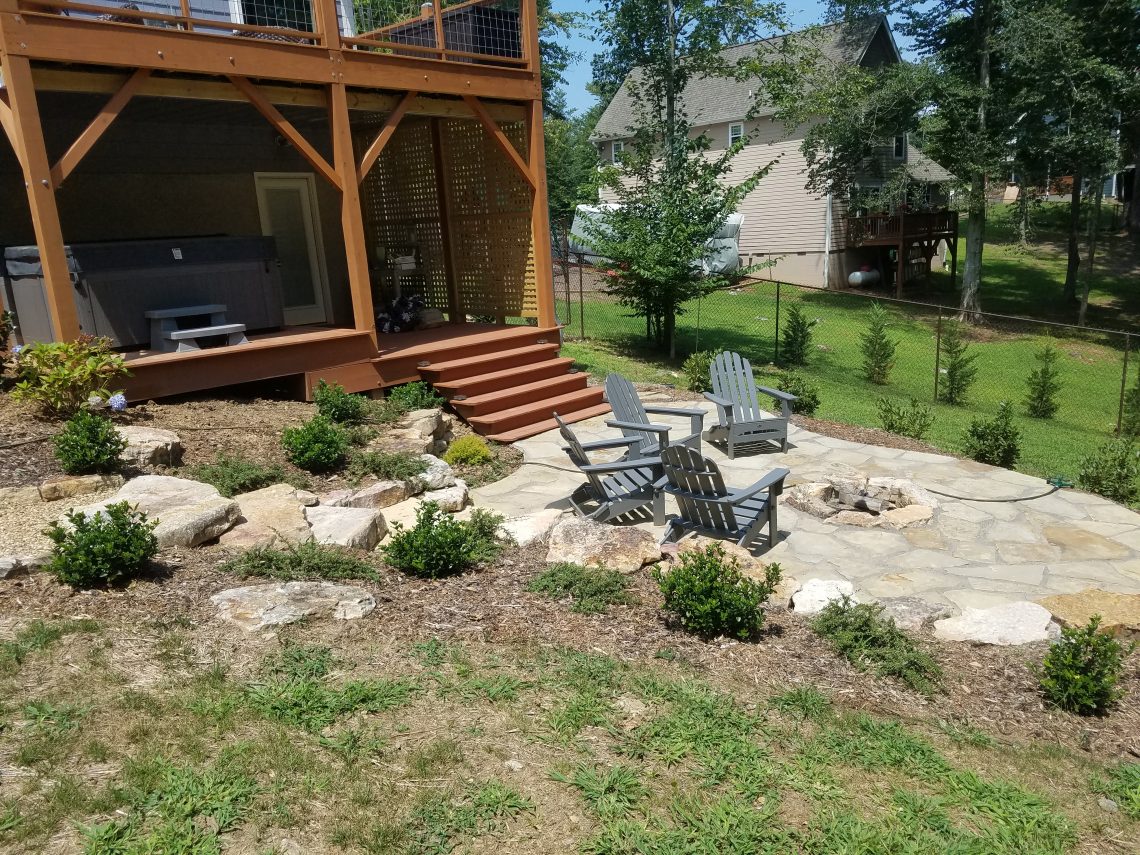 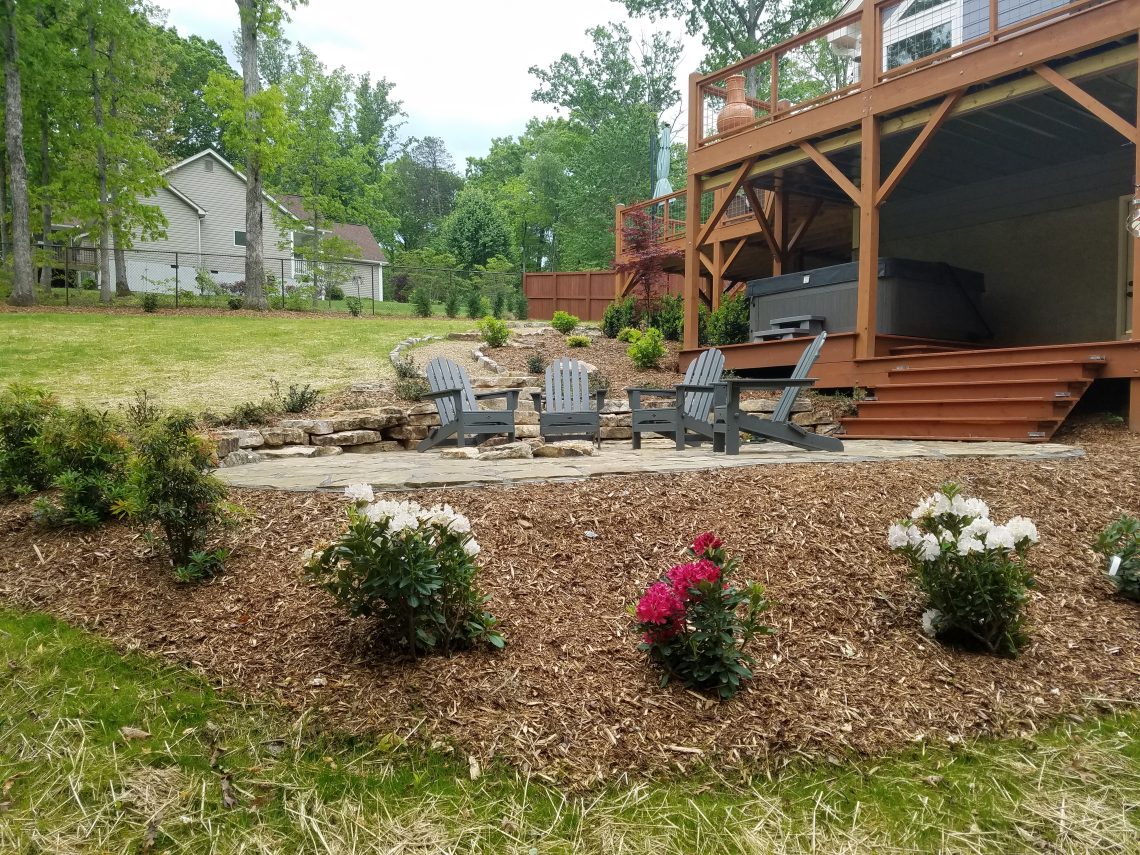 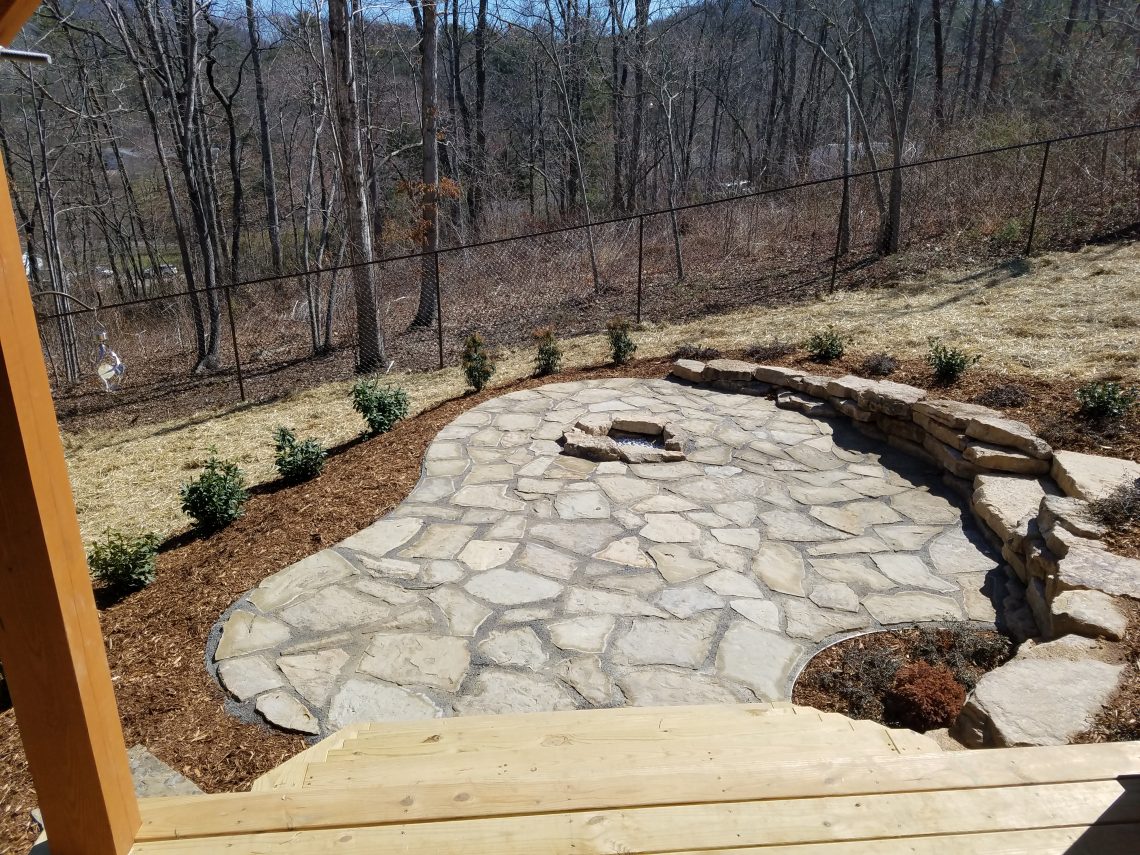 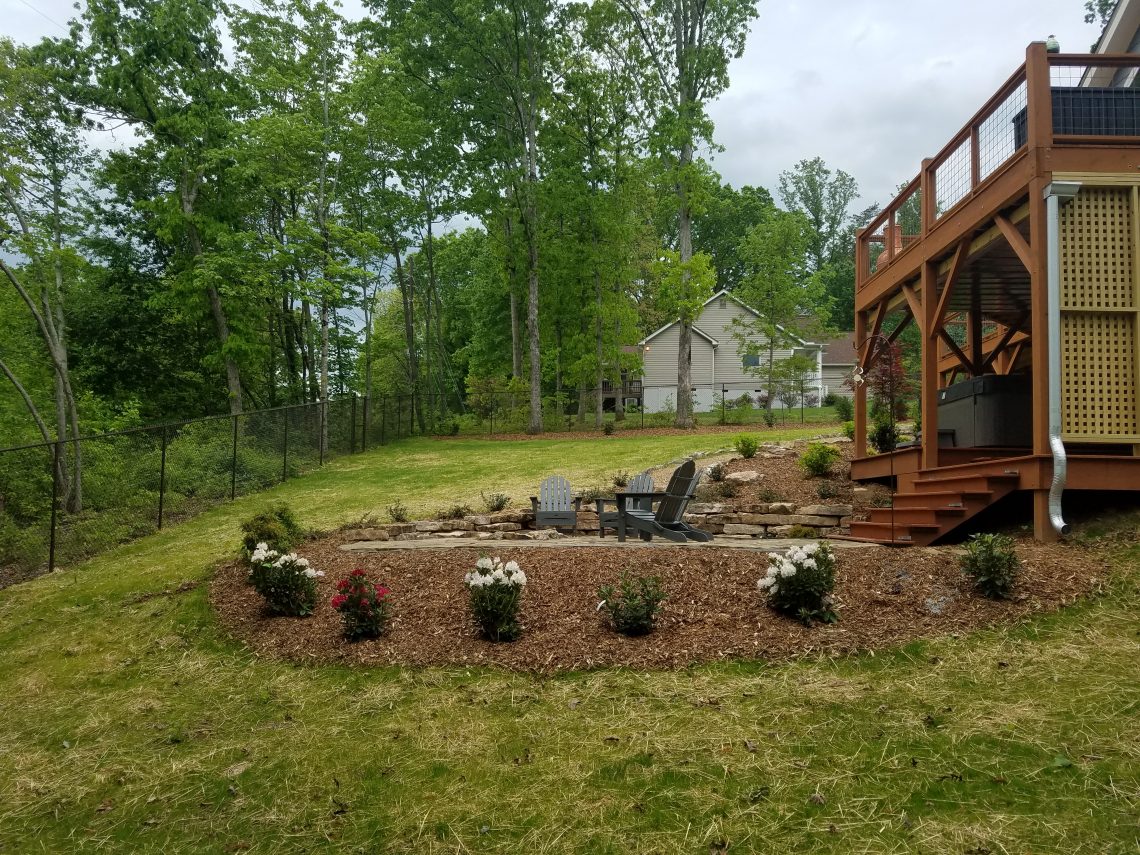 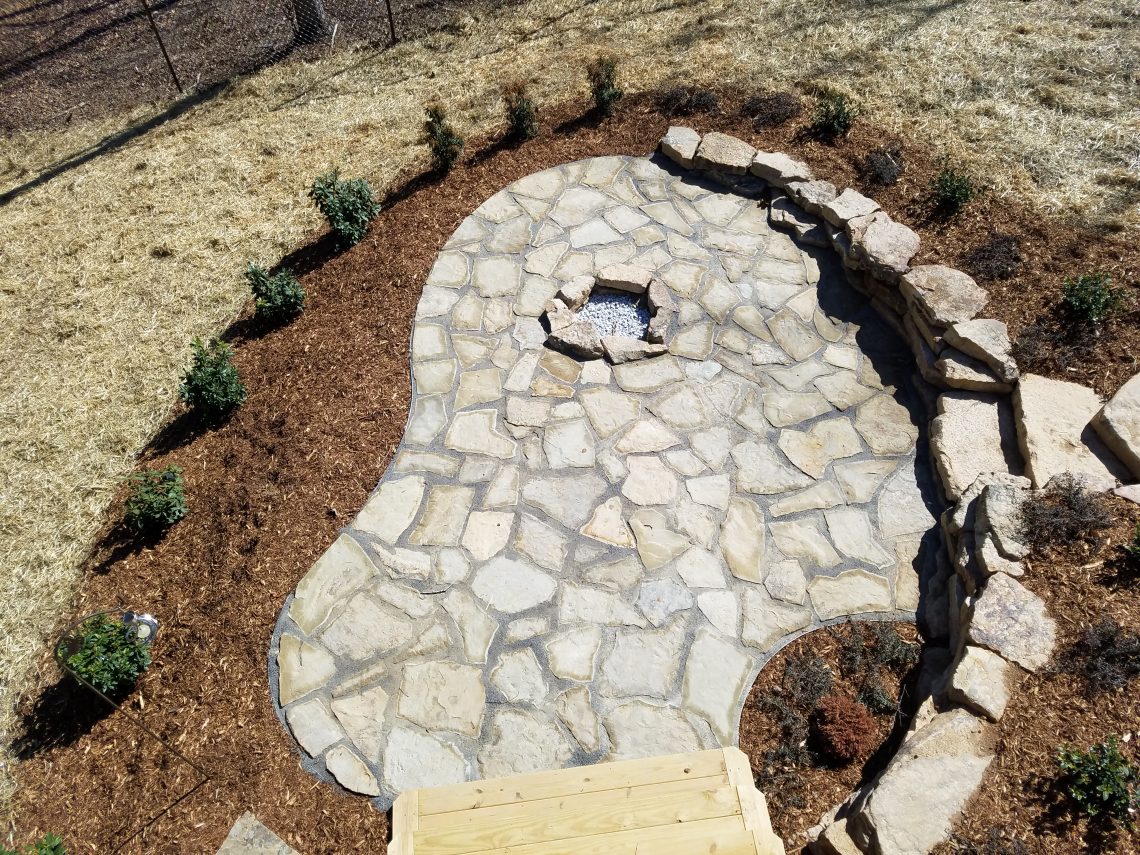